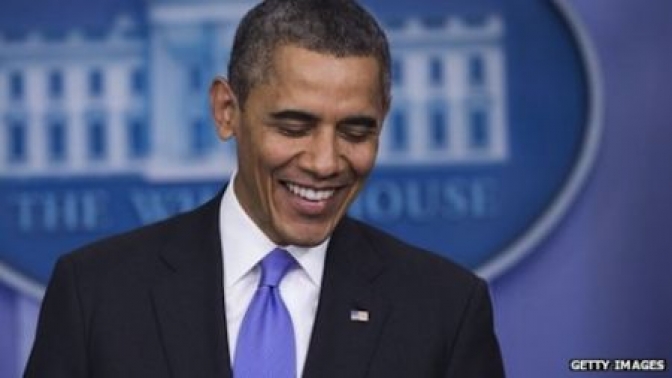 Citing stronger growth figures, US President Barack Obama says 2014 will be a 'breakthrough year' for the US economy. Economic growth in the US was revised upwards to its fastest pace since late 2011 on Friday.

The Commerce Department said GDP grew at an annualised rate of 4.1% between July and September, up from an earlier 3.6% estimate.

That gave shares a boost and the Dow and S&P 500 indexes closed at records.

In his last press conference of the year, the US President highlighted the improving data as promising for the year ahead.

"We head into next year with an economy that's stronger than it was when we started the year [and] more Americans are finding work and experiencing the pride of a paycheck," he said.

Much of the revision was due to stronger consumer spending, which accounts for two-thirds of the economy.

On Wednesday the US central bank, the Federal Reserve, announced it would start to slow its economic stimulus programme because of the improving economy - in particular the falling unemployment rate.

The central bank said it planned to scale back - or "taper" as it is known in the financial world - its $85bn (£51.8bn) a month bond buying programme by $10bn a month.

The Dow Jones Industrial Average rose 3% for the week to close out at a record level on news of the Fed's decision and the stronger economic data.

Analysts were encouraged by the GDP revision.

"Not only was third-quarter GDP above 4.0% for only the third time since the expansion began in 2009, the mix of growth looks better (though still not great) than a month ago after the first revision," said Chris Low and Jay Morelock of FTN Financial in a research note.

Previously, most of the third-quarter economic growth had come from a build up in business inventories.

This had concerned many analysts, because a build up in inventories doesn't necessarily indicate present demand but a hope for future buying.

"It also suggests the economy is poised for stronger growth in the new year than the middling 2% pace of the past year, meaning the tapering process will continue," he added.