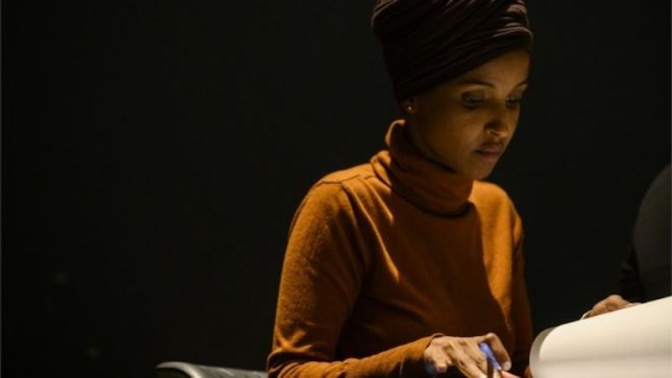 A US Democratic lawmaker has publicised a racist threat that she would be killed at the state fair by "a very capable person with a very big 'Gun'".

Ilhan Omar, a Muslim representative from Minnesota, said such anonymous messages are why she now has security guards.

She spoke as US Senate candidate Roy Moore tweeted: "President Trump was right, she should go back to Somalia".

Alabama Republicans have called for Ms Omar's expulsion from Congress.

"I hate that we live in a world where you have to be protected from fellow humans," Ms Omar, who came to the US as a Somali refugee aged 12, wrote on Wednesday.

"But until deranged people like this stop threatening my life and the lives of others, I have to accept the reality of having security." 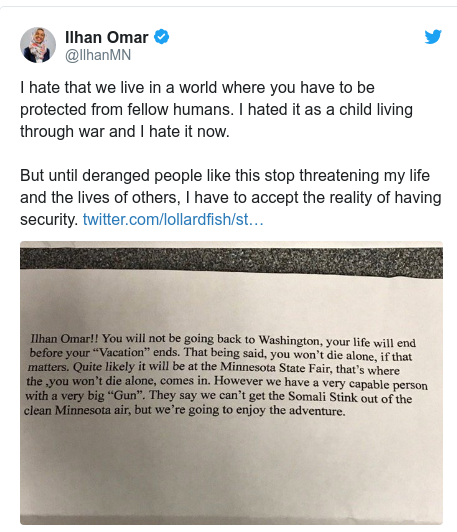 Conservatives have repeatedly lashed out at Ms Omar over her stance on Israel, accusing her of anti-Semitism.

Ms Omar has also faced censure from her own party over comments on US-Israel relations, but has denied charges of being anti-Semitic.

She has apologised in the past for stoking stereotypes of Jews in her remarks against lobbyists.

Ms Omar hit back on Tuesday: "I was elected with 78% of the vote by the people of Minnesota's 5th District, not the Alabama Republican Party."

She added a jab at Mr Moore, alluding to allegations by three women that he made sexual advances towards them when they were teenagers.

On Wednesday, he tweeted that Ms Omar was "a sworn enemy of Israel" and referred to a recent attack by President Donald Trump.

Mr Trump was accused of racism in July after calling on liberal Democratic congresswomen to "go back" to their "corrupt and inept" countries, though he did not name them.

Chants of "send her back" at a Trump rally followed the president's tweets.

The first-term lawmaker is also facing a Federal Election Commission (FEC) complaint from the conservative National Legal and Policy Center, which questions whether Ms Omar used campaign funds to pay a political consultant to whom she has been romantically linked.

Ms Omar has denied an extramarital affair, and declined to discuss her personal life in an interview with CBS Minnesota.