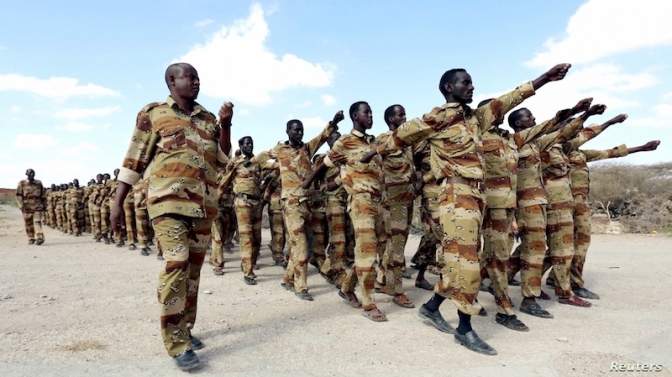 One morning in mid-August, the al-Shabab militant group launched a massive attack on a Somali government military base at the newly captured strategic town of Awdhegle in the Lower Shabelle region.

The attack started when a vehicle-borne improvised explosive device (IED) driven by a suicide bomber approached the base and exploded. Moments later, a second suicide vehicle blew up on the other side of the base.

In typical al-Shabab style, heavily armed militants attempted to storm the base. Somali soldiers backed by African Union troops from Uganda held on, defeating al-Shabab. Four Somali government soldiers, a cameraman embedded with the military and a Ugandan soldier were killed, according to officials. Seventeen others were injured. Al-Shabab lost 23 men, according to the officials.

Attention, however, quickly turned to how the Somali soldiers, who were on the front line, managed to repel a major attack, a rare achievement.

"He personally took his AK-47 and led the fight," said Mohamed Abukar Aweys, the mayor of Awdhegle, who was at the base that morning. "I saw him encouraging the soldiers to fight."
His senior commander, General Dahir Aden Elmi "Indhoqarsho," says if General Rageh had not been there, "things would have been different."

"His presence changed the morale of the soldiers, changed the fight; they fought bravely because of the commander," said General Elmi. "He led the defense, and the charge. They won with his operation plan."

For seven months, Rageh has been the commander of the land forces. He has a history of fighting hard against al-Shabab in Mogadishu, the Somali capital. On Aug. 22, Rageh was appointed as the new army chief. Elmi handed over the top Somali army post to his understudy this past Tuesday.

At 32 years of age, Rageh is believed to be the youngest officer to hold the position. He is also the first officer to lead the army, and received all his ranks because of the fight against al-Shabab.

Rageh joined the army in 2005, when the militants were embedded with a group known as the Islamic Courts Union in Somalia. At the time, the then-transitional federal government was based in Baidoa because Mogadishu was controlled by hostile forces. He had to travel there to join the army.

He returned to Somalia in December 2009 and was transferred to the presidential guards at a time when al-Shabab was just hundreds of meters away from the presidential palace. That same month, he was made a lieutenant.

FILE - Al-Shabab Islamist militants display weapons believed to be recovered peacekeepers suspected to have been killed during fighting in Somalia's capital Mogadishu, Oct. 21, 2011.

For the next two years, the Somali government fought a deadly, back and forth battle against al-Shabab in Mogadishu. Rageh was the operation commander of two mobile units, one infantry and one technical, that fought from the palace to the main Bakara market five kilometers north of the palace.

"His units faced huge obstacles because al-Shabab was using underground tunnels," said one of his former senior commanders, who did not want to be named because he is not allowed to speak to media.

When government forces took over Bakara market in late May 2011, Rageh and his units were transferred to support the military court that was prosecuting al-Shabab and members of the army, who kill unlawfully. In August of that same year, al-Shabab was forced to pull out of the capital.

In 2012, Rageh was promoted to captain. In 2013, he was sent to Turkey for training at the National Defense University in Istanbul. He studied staff training, commanding a brigade and army management.

Rageh held that post until March 2018, when he became a lieutenant colonel.

The biggest surprise came in August of that year when President Mohamed Abdullahi Farmao reshuffled army chiefs and appointed him as the deputy army chief, over all the other senior commanders; and his promotion to brigadier general came along. But just seven-and-half months later, he was moved to another post as the Land Forces commander, a position he held until Aug. 22 when his whirlwind rise shot him to the top army post.

Critics are already questioning his lack of experience, and how long he will hold the post given that he is the fourth army commander in fewer than four years.

The other challenge Rageh faces is that the Somali army is at a critical point, going through reform and reintegration, while fighting al-Shabab. The army is not yet ready to take over security responsibilities from African Union forces. Meanwhile, al-Shabab is relentless with its attacks. It controls a huge part of Somalia's countryside, including the new commander's hometown, Adan Yabaal, some 180 kilometers north of Mogadishu.

At his inauguration, the general said he will prioritize building the army, discipline, training, capacity building and fighting al-Shabab.