Her mission: Get East Africans to stop smoking Featured 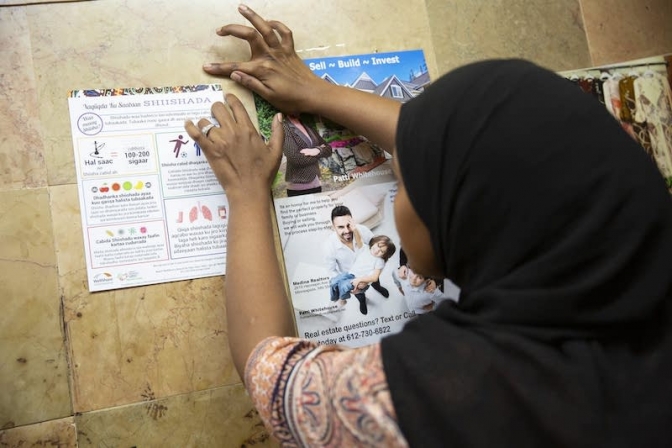 Zahra Bashir is trying an unconventional approach to get community members to understand the dangers of cigarettes, e-cigarettes and hookah. It’s not an easy sell.

This story comes to you from Sahan Journal, a nonprofit newsroom dedicated to providing authentic news reporting about Minnesota's new immigrants and refugees. MPR News is a partner with Sahan Journal and will be sharing stories between SahanJournal.com and MPRNews.org.

Abdi Hashi huddled under an awning outside Karmel Mall in Minneapolis on a recent rainy afternoon, chatting with friends, gesturing with one hand as he talked and holding a cigarette in the other.

The 55-year-old man has smoked for decades. For him, the warmth of a smoke between his fingers is a touchstone to life in Ethiopia and Somalia and a way to ease the chill of a Minnesota winter.

He knows it’s not healthy. But smoking is woven into the social fabric of some of Minnesota’s East African communities, so breaking the habit isn’t easy.
“Every night, I say, ‘Tomorrow I quit.’”

Abdi’s refrain is one Zahra Bashir hears often. A program coordinator with WellShare International, she spends about a third of her time talking to community members about the dangers of cigarettes and all tobacco products, including hookah and electronic cigarettes.

On a recent afternoon she stopped at Karmel Mall with Adar Kahin, a colleague at WellShare International and a well-known singer and actress in the Somali community, to promote health education.’

The duo went store-to-store at the colorful Somali mall filled with traditional attire, home decor and imported rugs. They laughed with store owners who immediately recognized Adar and asked her for a photo or video for a social media update.

It’s an unconventional approach to a serious issue. A 2008 study by WellShare International found peer pressure and other social factors drove tobacco use among Somali people in Minnesota. It also found that a lack of medical insurance made it difficult to quit.
 
From left, WellShare community health workers Adar Kahin and Zahra Bashir discuss the health dangers of smoking with Mahat Moore and Abdi Hashi at Karmel Mall. Hashi has been smoking for 40 years. Christine T. Nguyen | MPR News
Bashir visits Somali malls about four times a month to make people aware of the dangers of smoking and how to find help to quit. She speaks to the side effects of secondhand smoke on children and how tobacco smoke moving through building vents can cause numerous health problems.
\
She doesn’t ask people whether they use tobacco products.

“For women, it’s really hard to be able to even get them to open up not only about their use but even to be like, ‘Yeah, I understand what this is,’” she said. “They just shy away from the conversation in general.”

As a young Somali woman,Bashir is easy to talk to. And the instant connection with Adar helps women, especially, get comfortable enough to talk about the topic.

Some women in the Somali community use hookah, a water pipe that burns fruit-flavored tobacco and is smoked for hours in social settings.

“It’s a huge misconception in our community that hookah is a healthy alternative,” Bashir said. “That it doesn’t have as much toxic chemicals in it, that it doesn’t cause all of these diseases and disorders that come from smoking tobacco products.”

Businesses in the Twin Cities are smoke-free, so hookah smoking indoors isn’t as easily accessible as it once was. But outdoor smoking is still allowed and the water pipe can be seen in homes, ready for use when visitors come around on weekends.

Bashir said she also points people to alternatives: tea and conversation. Instead of “shisha” or hookah, she suggested, invite people over for “shaah,” or tea.

At Karmel Mall, Hawo Abdullahi chatted with her as she waited for the henna on her hands to dry. Hawo is the mother of two young children and wasn’t as concerned with the potential effects of smoking as other parents Bashir came across, who have older kids.

But Hawo didn’t know much about e-cigarettes and said she plans to share the information with others in her community.

“She was basically saying, ‘I’m going to tell people this is not good for you and it’s a bad practice to have,’” Bashir said, translating from her conversation with Hawo in Somali.
She said Hawo described smoking as “a big time waster. Not only will it cause health problems, but it’s a time waste.”