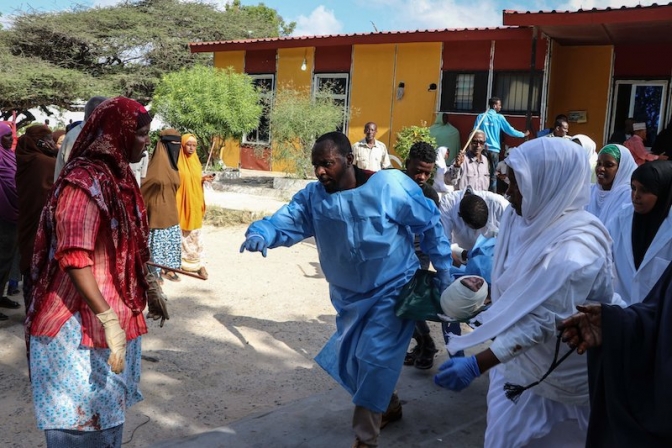 Officials said a truck filled with explosives blew up at a busy intersection in the capital. Shabab militants are suspected in the attack.

MOGADISHU, Somalia — At least 76 people were killed on Saturday when a truck filled with explosives blew up at a busy intersection in the Somali capital, in the worst attack in the country in years, officials said.

The blast occurred just before 8 a.m. local time at Ex-control Junction, an intersection that connects Mogadishu, the capital, to the rest of southern and southwestern Somalia. Videos posted on social media showed smoke plumes rising from the scene, where mangled frames of vehicles and covered bodies lined a sandy street.

The attack is the latest in a string of deadly assaults in the country this year, raising questions about the ability of Somali forces to secure the nation and highlighting concerns about resurgent militant activity.

Abdulkadir Adan, the founder of Aamin Ambulance, Somalia’s only free ambulance service, said his team had counted at least 76 dead and 70 wounded. Abdirizak Mohamed, a member of the country’s Parliament, said on Twitter that he had been told that the death toll was over 90.

Mogadishu’s mayor, Omar Mohamud Mohamed, said at a news conference that there had been “many deaths and injuries,” but that the precise death toll was unknown. He said that many of the wounded were students.

There was no immediate claim of responsibility for the bombing, but suspicion fell on the Qaeda-linked terrorist group Shabab, which has carried out attacks on hotels, government offices and public spaces in Somalia.

President Mohamed Abdullahi Mohamed ordered the government to put all of its resources toward supporting the wounded and families of the dead.

“The terrorists massacred the people because of the enmity they have for the country’s development,” he said in a statement.

The country’s prime minister, Hassan Khayre, said in a statement that he had appointed a national committee that would help respond to the victims and evacuate those who might need medical care abroad.

The foreign minister of Turkey, Mevlut Cavusoglu, said in a statement that two Turkish citizens were killed in the blast. “Our fight against terrorism will resolutely continue,” he wrote on Twitter.

The attack, one of several this year in Mogadishu, fueled concerns about the abilities of Somali forces as African Union troops begin to withdraw from the Horn of Africa nation. The African Union peacekeeping operation has been active in Somalia since 2007, but Somali forces are set to assume responsibility for the country’s security in May.

The attacks have also cast a spotlight on the resurgence of Shabab, which still control large areas of the country and continue to raise considerable funds through local taxation and extortion.

The Trump administration has intensified airstrikes in Somalia targeting militants, but the group has proved resilient and continues to carry out deadly attacks in both Somalia and neighboring countries like Kenya.

In January, the Shabab claimed responsibility for the attack on a luxury hotel and office complex in Nairobi, the Kenyan capital, that killed more than 20 people. In July, militants killed 26 people in a hotel in the southern port city of Kismayo, including a prominent Canadian-Somali journalist, Hodan Nalayeh.

The same month, a suicide attack by the group fatally wounded the mayor of Mogadishu at the time, Abdirahman Omar Osman, a British-Somali citizen. And on a single day in September, the Shabab targeted an American base in Somalia and a group of Italian peacekeeping troops.

Murithi Mutiga, the Horn of Africa project director at the International Crisis Group, a research organization, said the attacks showed the group’s reach.

“This is a year in which they demonstrated a capacity to attack in the capital at a rate that signifies they remain a very potent player in Somalia,” he said.

The Shabab were also suspected in one of the deadliest terrorist strikes in recent years, a double truck bombing in the heart of Mogadishu that killed nearly 600 people in October 2017.

Somalia is expected to hold elections next year, but a political stalemate between the central government and federal states has dampened the prospect of change. After the attack on Saturday, some Somalis lamented the state of the nation’s politics and asked when lawmakers and leaders would deal with the security situation.

“When will our politicians have human feeling to the relentless massacre against the innocent citizen?” Ahmed Ibrahim, a Mogadishu resident, wrote in a post on Twitter. “Here they are arguing and competing for power, but who will they rule?”