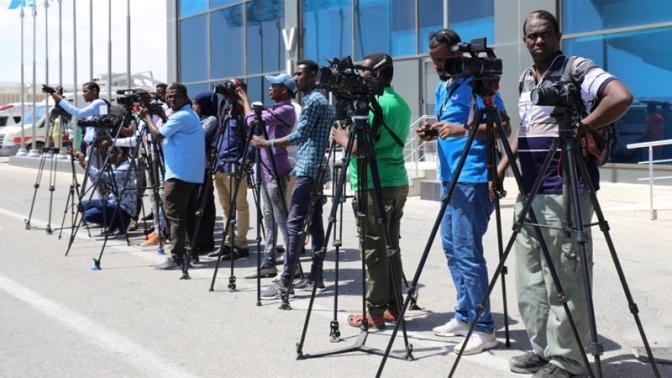 State security forces arrested 38 journalists, while 37 were beaten, shot at or threatened at gunpoint, report says.

Somalia's government forces beat and arrested a record number of journalists in 2019, the country's journalists' syndicate told Reuters news agency, prompting suggestions that the government is suppressing scrutiny of its security record ahead of this year's elections.

That compares with to 16 journalists detained in 2017, 12 in 2016, and six in 2016, the year before President Mohamed Abdullahi - known by his nickname Farmajo, and at that time a citizen of both Somalia and the United States - took power, Mumin said.

"The government is not allowing journalists to report," he said.

In most cases, journalists are not charged and are released after hours or days, according to the SJS report, which is due to be released next week.

Last year, 37 journalists were beaten, shot at or threatened at gunpoint in Somalia, mostly by state security forces, the report said. The figures do not include the breakaway republic of Somaliland.

Somalia's police spokeswoman, the interior minister and information ministry spokesman did not respond to requests for comment.

"I have no comment," Prime Minister Hassan Ali Khaire told Reuters when asked about the crackdown during a visit to Qatar.

There is no public database of attacks and bombings in Somalia. Citizens usually hear about attacks through the media.

Farhan Mohamed Hussein, a reporter for privately owned Radio Kulmiye, said he was arrested three times last year and twice in 2018. Once, police blindfolded him and beat him with gun butts, he said. Another time, they smashed his camera.

"Many people see you as an enemy when they see you have a camera," he said. "Reporters are victims of the government which was supposed to work with them ... Farmajo’s government is the worst we have ever seen."

Journalists have been banned from parliament and ignored by spokesmen who simply put out official statements on social media, Hussein said. Mumin confirmed the ban and said the upper legislature is considering a bill to further restrict media freedom.

"Farmajo’s police beat you with gun butts ... They openly tell you 'no covering stories of blasts'," she said, adding that after she posted news of one bombing on Facebook, police came to her home to arrest her and threatened her family.

In April, the government told privately run Aamin Ambulance - often the only source for casualties from armed groups attacks - to stop releasing numbers that tally the dead and wounded, said the service's head, Abdikadir Aden. They also tried to restrict ambulances from blast sites, he said.