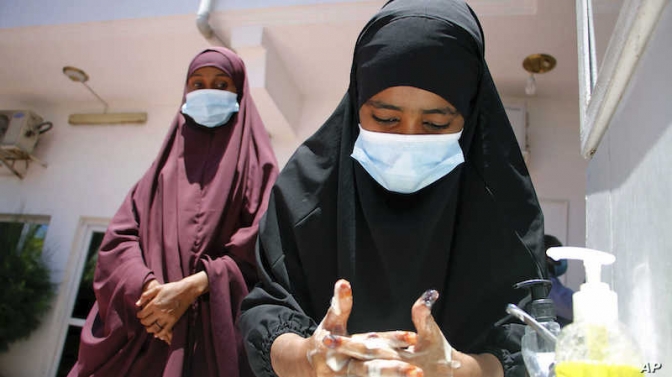 NAIROBI - The International Crisis Group said the coronavirus poses the threat of a political crisis to Somalia as the country heads toward its scheduled November election.

The Brussels-based think tank calls on political leaders to discuss the electoral process to avoid violence. Somalia has recorded more than 900 COVID-19 cases so far.
The Somali government is attempting to fight the coronavirus pandemic while preparing for the elections due to take place in six months.

In this file photo taken on March 19, 2020, students walk in a Mogadishu neighborhood wearing face masks as protective measure against the COVID-10 coronavirus.

Senator Ilyas Ali Hassan, a member of the opposition, says the health crisis is no excuse for the government not to hold the election on time.

“The issue of coronavirus can be a small factor when it comes to election preparation” Hassan said. “The government has not prepared the ground well.

Dahir Amin Jesow is a member of the interior committee in the Somali parliament. He said the government will hold the election on time.

“It’s possible to do election on time if we not affected so much by the coronavirus and doesn’t take a long time to get the situation under control,” Jesow said. “Gathering of people is discouraged this time due to the virus, but if it's controlled, then the election can be held.”

The November elections are for members of parliament. The elected legislators will then choose the president in February 2021.

A worker marks a social distancing sign as a preventive measure against the spread of the coronavirus disease (COVID-19), at the market centre in Hamarweyne district in Mogadishu, Somalia, April 16, 2020.

Somalia has never held a one person-one vote election. Opposition leaders said doing it in Somalia will be difficult due to security reasons and the troubled relationship between the central government and some of the regions. ‚Ä® ‚Ä®Omar Mahmood is a senior analyst on Somalia at the International Crisis Group. He believes Somali leaders can reach agreement on how to hold the election.

“One way or another, there needs to be some sort of consensus process that happens internally in the country,” Mahmood said. “If all the parties agree that yes, this is unprecedented time and we do need more time to run the elections, its not necessarily an issue.  But the issue is getting everyone on the same page and get everyone to agree, especially given that the process was already complicated, but corona adds a very much complicated layer to it.”

In an encouraging sign, Somali government forces have regained ground from militant group al-Shabab in recent months, and the government has normalized relations with some regions, although not with Puntland and Jubaland.

How Somalia, one of the world‚Äôs most fragile states, is working for a more resilient, low-carbon future