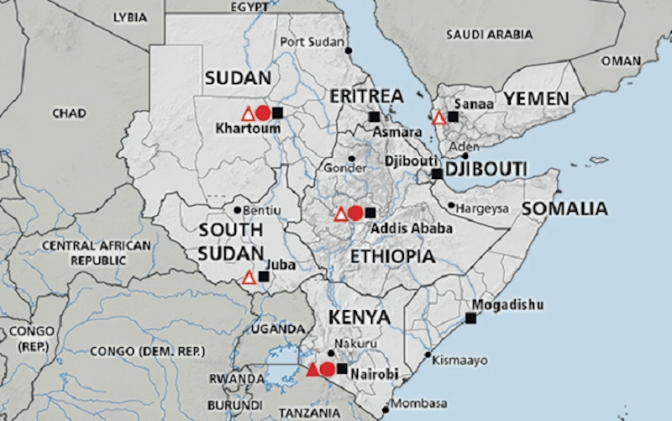 At least six people have been killed and 20 others injured in an attack at the port city of Kismayo in Somalia. Authorities revealed that among the dead was the chairperson of Jubaland Chamber of Commerce, Shafi’i Rabi Kahin. The suicide bomb attack took place outside a mosque as congregants were leaving after the Friday prayers.

* The al-Shabaab militant group active in the country claimed responsibility for the attack.

* The attack comes just a day after a landmine struck a busy restaurant in the border town of Elwak.

* The al-Shabaab has waged war for decades with an aim to overthrow government and establish an Islamic government based on Sharia law.

It is alleged that a suicide bomber who had a vest full of explosives targeted the congregation at the Qaadim mosque. The al-Shabaab militant group active in the country claimed responsibility for the attack.

The attack comes just a day after a landmine struck a busy restaurant in the border town of Elwak killing two people and injuring three others.

On Wednesday, another attack at the Blue Sky restaurant in Mogadishu that claimed three lives. According to authorities, the attacker walked into the restaurant then blew himself up. Seven other people were injured in the attack.

On the same day another suicide bomber blew himself up near the presidential palace killing five people. The al-Shabaab claimed responsibility for the attack.

Attacks from the Al-Shabaab have been on the rise in recent days. A week ago dozens of people were killed after they clashed with the al-Shabaab in villages in the central part of the country in an attack that lasted five hours. It was reported that 15 militants were also killed in the attack.

It is alleged that the militant group have over the years demanded for livestock and arms for what they called “holy war” something the resident seem to get tired of doing.

On August 15, sixteen people including five al-Shabaab fighters were killed and eleven civilians were killed in an attack at a beach hotel that is often frequented by foreign and local dignitaries in Mogadishu.

The police ended the four-hour siege at Elite hotel after killing all the attackers. It is alleged that the attack began by a car bomb at that hotel’s entrance that gave the other attackers access to the hotel.

Earlier in the month, at least eight soldiers were killed in an attack by the al-Shabaab at a military base in Bay province.

On July 12, 2019, an attack at the Asasey Hotel in Kismayo that lasted fourteen hours claimed the lives of 26 people. The attack started with a car bomb that destroyed the hotel’s entrance giving the attackers access, three of the attackers were gunned down by security personnel.

The al-Shabaab has waged war for decades with an aim to overthrow Internationally-backed government and establish an Islamic oriented government based on its understanding of the Islamic Sharia law.

The attacks often target security personnel, politicians and prominent people in the country and has so far claimed dozens of lives. The group was pushed out of the country’s capital, Mogadishu in 2011 by African troops and the government.

ÔÇÿWe are your citizensÔÇÖ: Australians stranded in Africa plead for government help to return home