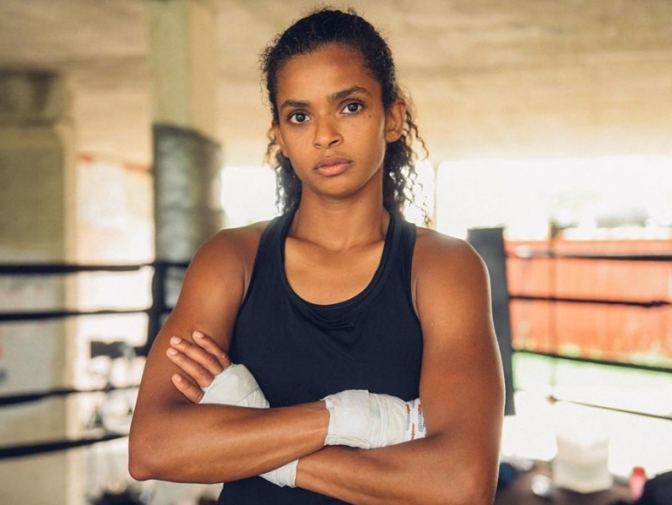 Ali has signed with Matchroom and Anthony Joshua’s management label Ramla Ali, a boxer who became British champion without her family’s knowledge after fleeing civil war in Somalia, has signed a professional deal with Eddie Hearn’s Matchroom Boxing.

Ali is aiming to become the first Somali boxer to go to an Olympics and is due to make her professional debut in October.
She started boxing as a teenager after arriving in London as a refugee.

Signed to unified heavyweight world champion Anthony Joshua’s 258 management label, Ali is trained by her husband Richard Moore and will compete at super-bantamweight.

Ali said after turning over: “I want to become a world champion. I hope in doing so people will develop a better view of Somalia.

Arriving in London, Ali was bullied at school for being overweight and began going to the local gym where she discovered a love for boxing.

Ali initially kept her training a secret for fear that her family would disapprove of the sport for a Muslim girl.
In her early teens, Ali told her mother that she was simply training for fitness rather than to compete. When she won her British and English titles in 2016, Ali told her parents that she was going out for a run.

As an amateur, Ali became the first female Muslim boxer to win an English title before deciding to represent Somalia in 2017.

Ali wanted to go to the postponed Olympic Games next year as the first Somali boxer to do so, but the uncertainty caused by coronavirus has made her anxious to fight before then.

She said: “I wanted to get a head start in my professional career so now is the best time to turn pro.

“I just want to get in the ring, and I feel like I can do that sooner being a pro rather than waiting around for an Olympic Games that might not come.

“The Olympic dream is still there but I'm excited to begin my journey in the professional ranks."
Promoter Eddie Hearn said: “Ramla's story is incredible and inspiring. She has gone through so much to get to this point.

“Ramla joins an unrivalled Matchroom stable that boasts some of the very best female fighters on the planet and she is in the perfect place to fulfil her dream of becoming Somalia's first world champion.”