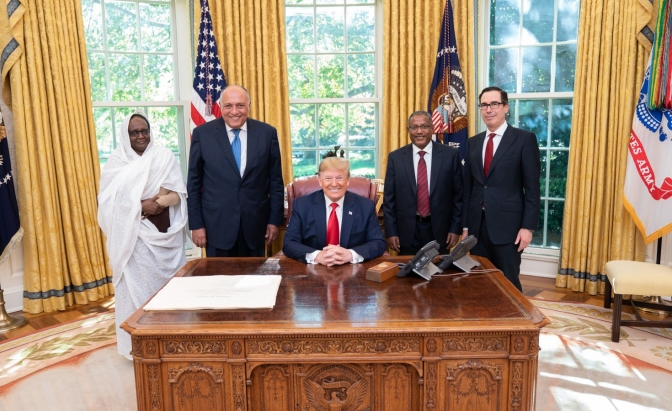 US President Donald Trump predicted that Egypt would "blow up" a mega-dam that Ethiopia is building on the Nile. Neighboring countries have criticized plans for the Grand Ethiopian Renaissance Dam.

Ethiopia demanded Saturday that the US "clarify" remarks by President Donald Trump in which he said Egypt may try to "blow up" the controversial Grand Ethiopian Renaissance Dam currently under construction in the East African country.

Ethiopian Foreign Minister Gedu Andargachew summoned US Ambassador Mike Raynor to demand an explanation, according to a statement from the ministry.

"The incitement of war between Ethiopia and Egypt from a sitting US president neither reflects the long-standing partnership and strategic alliance between Ethiopia and the United States nor is acceptable in international law governing interstate relations," read the statement.

Trump made the comments on Friday during a ceremony marking normalizing relations between Israel and Sudan. The new dam is being built just 15 km (9 miles) east of Ethiopia's border with Sudan.

"It's a very dangerous situation because Egypt is not going to be able to live that way," Trump told reporters in the White House.

"They'll end up blowing up the dam. And I said it and I say it loud and clear -- they'll blow up that dam. And they have to do something," added Trump.

Ethiopia has been pushing the dam project to expand its power exports. However, the infrastructure project is being built on one of the two major tributaries of the Nile river, which Egypt depends on for about 97% of its drinking water and irrigation.

"There are two facts that the world has certified. The first is that there has been no one who has lived in peace after provoking Ethiopia. The second is if Ethiopians stand united for one purpose, it's inevitable they will triumph." the statement read.

"Reckless conversation of the President of US with Sudanese PM. Sorry to say but the man doesn't have a clue on what he is talking about," read the tweet.
Washington attempted to broker a deal to resolve the issues surrounding the dam earlier this year, but those talks fell through after Ethiopia accused the Trump administration of favoring Egypt.

The US said last month that it was suspending a portion of its financial aid to Ethiopia due to a lack of progress of talks on talks, as well as the country's "unilateral decision" to fill the dam's reservoir.

The US State Department told The Washington Post earlier this month that the amount of aid that was on hold was "approximately $264 million (€223 million)."