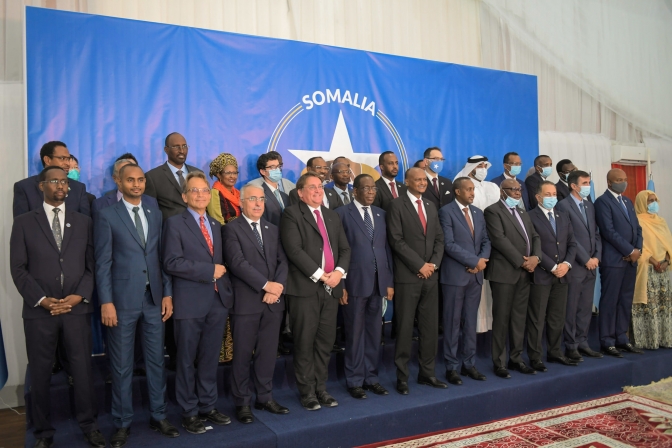 MOGADISHU (HORN OBSERVER) The recent Somalia Partnership Forum enabled all involved to openly exchange views on current developments in the country and to agree on the 2021 Mutual Accountability Framework, which sets out key priorities on inclusive politics, security and justice, and social and economic development.

"Somalia’s international partners remain deeply concerned about the ongoing disagreements over the implementation of the 2020/21 electoral process. Further discussion and agreement is also needed on how the 30 per cent women’s quota in committees, amongst delegates, and for seats will be assured," the joint statement said.

They suggested that, these disagreements need to be resolved in a manner that respects the 17 September political agreement and the implementation protocols signed by the Federal and Federal Member State (FMS) leaders on 1 October.

The international partners warned against a possible parallel election

"Initiating a parallel process or imposing disputed electoral management committees that do not meet the agreed criteria undermines the legitimacy of the electoral process and creates instability," they said.

"We therefore reiterate our call on the Federal and FMS leaders to reconvene urgently and to reach out to other stakeholders to resolve concerns about the management of the electoral process through consensus-building so that timely, transparent, and credible elections embraced by the Somali people and all key stakeholders can take place," the statement adds.

To that end, the international  partners welcomed Prime Minister Mohamed Hussein Roble’s commitment to convene the leaders in Mogadishu following his current visits to the Federal Member States.

"We stand ready to provide support to the Federal and State electoral committees once the dialogue to resolve the dispute over their composition is successfully concluded. Transparency and good faith in implementing the electoral process according to the agreed rules will also be important."

The foreign diplomats noted in their statement that institutionalization of such meetings of the leaders will help prevent the recurrence of a protracted political impasse.

"To that end we would urge parties to recall commitments made at the Somalia Partnership Forum under the 2021 Mutual Accountability Framework to a secure electoral process based on ongoing dialogue, and to the establishment of a mechanism for dialogue on this process to meet not less than monthly.

"In the coming weeks, we look forward to working with the Federal Government and FMSs to advance other key decisions from the Somalia Partnership Forum that require immediate follow-up. These include safeguarding the gains from the review of the Constitution prior to elections, consultations on developing the 2024/25 elections roadmap, signing the audit bill, finalizing the Somali Transition Plan, and preparing for the force generation conference planned for January 2021.

"In the meantime, we call on all stakeholders to refrain from any statements or actions that could create tensions or incite violence."
Source: hornobsever