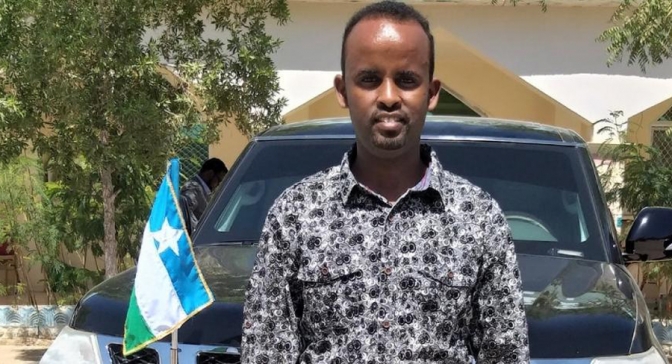 As the arbitrary arrests and detentions of journalists continue at an alarming rate and the presidential election draws closer, Reporters Without Borders (RSF) calls on the authorities to enact as soon as possible the promised moratorium on deprivation of liberty measures targeting journalists for crimes allegedly committed in the exercise of their function.

After already 12 days behind bars, the independent journalist Kilwe Aden Farah has still not been brought before a court. Arrested on December 27 for covering a demonstration against rising prices in Puntland, he is still being held in an unknown location in the semi-autonomous federated state of Somalia.

The detention comes as arbitrary arrests of journalists continue at an alarming rate. Farah Mohamed Khalif , also a freelance journalist, was arrested along with his colleague Kilwe Aden Farah before being released two days later. On December 26, journalist Ali Dahir Herow was unlawfully arrested and detained by local authorities in the central town of Beledweyne after covering a demonstration. A few days earlier, on December 23, the latter had also arrested journalist Abdulkadir Farah Dulyarafter his interview with a commander of an armed rebel militia. He was released the next day. In all, RSF and its local partner, the National Union of Somali Journalists (Nusoj) recorded 32 arbitrary arrests of journalists in 2020.

"The cases of journalists deprived of their liberty for a few days or several weeks for the simple fact of having done their job remain extremely high in Somalia and testify to the urgency to adopt the moratorium promised on these arbitrary arrests, says the official of the RSF Africa office, Arnaud Froger.  The swift implementation of this moratorium is all the more essential as pressure on journalists is likely to increase as the February presidential election draws closer. The case of Kilwe Aden Farah is emblematic. This reporter has nothing to do in prison. We call for his unconditional release. ”

On the occasion of an unprecedented mission carried out last October, RSF and the National Union of Somali Journalists (Nusoj), had met Somali President Mohamed Farmaajo and Prime Minister Mohamed Hussein Roble to ask them to take concrete measures to '' improve the still very hostile environment in which the Somali media operate. The Prime Minister then pledged to put in place a moratorium on the arrests of journalists.

At the time of this mission, the director and owner of the very popular private channel Astaan TV, Abdimanan Yusuf , had been in detention for several months in a completely fabricated case against him. Arrested in July in the self-proclaimed independent state of Somaliland, he was later sentenced to five years in prison and his channel suspended. He was finally released on December 10.

Somalia is ranked 163rd out of 180 countries in the World Press Freedom Index published each year by RSF.