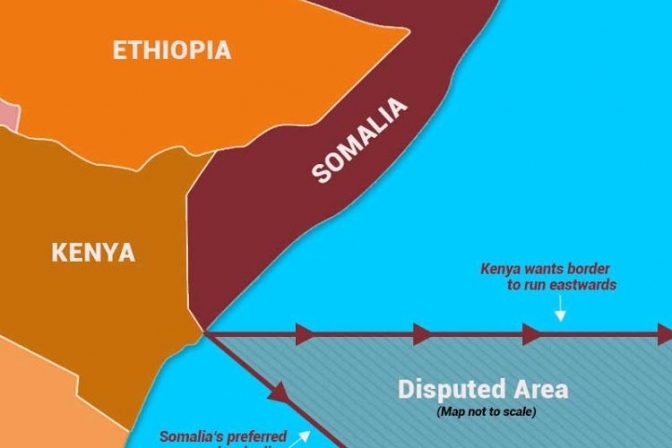 Kenya and Somalia have resolved to end the maritime dispute that had threatened to end good relations between the two neighbouring countries.

In a statement released by the Federal Republic of Somali, the move was necessitated by the need to enhance relations between the two nations.

"The Federal Government of Somali announces that in keeping with the interests of good neighborliness, it has resumed diplomatic relations with the Republic of Kenya," the statement read in part.

The two countries have now agreed to maintain friendly relations on the basis of principle of 'mutual respect for sovereignty and territorial integrity, non-interference in each others internal affairs, equality, mutual benefit and peaceful co-existence'.

This new twist comes at a time when the two nations were expressing frosty ties catalyzed by maritime border conflict that dates years back.

Kenya maintained that its border at the Indian ocean should take a roughly 45-degree turn at the shoreline and run in a latitudinal line.

On the other hand, the neighbouring Somali argued that the boundary should take a south-easterly path of the country’s land border
The conflict saw Somalia file a case at the International Court of Justice (ICJ) in its bid to find the solution to the matter. Kenya was opposed to the move and called for other dispute resolution mechanism.

Kenya decided  not to take part in Monday’s proceedings, citing 'perceived bias and unwillingness' of ICJ 'to accommodate requests for the delaying the hearings' as a result of the pandemic.

The disputed area, about 100,000 square kilometres, is thought to be rich in oil and gas. Both countries accuse each other of auctioning off blocks before a ruling by the court.

The push and pull saw Kenya order repatriation of refugees, who are majorly Somalis, back to their mother country.