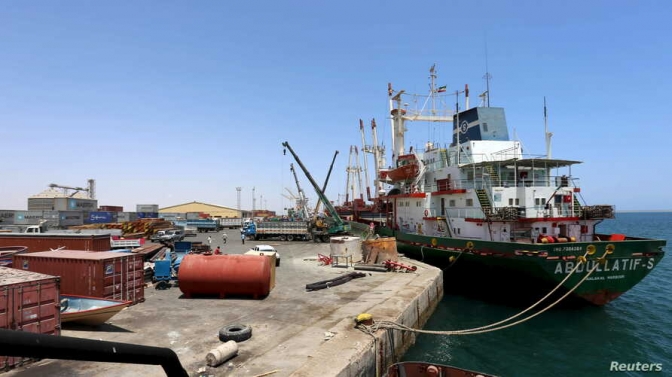 A new container terminal has opened at Berbera in the breakaway region of Somaliland, as part of an effort to build a major regional trade hub.

Port operator DP World opened the shipping facility Thursday during ceremonies attended by a high-level Ethiopian delegation led by Ahmed Shide, Ethiopia’s minister of finance, and by Mustafa Mohammed Omar, the president of Ethiopia’s Somali region.  The development is a part of a $101 million project to expand the port on the southern coast of the Gulf of Aden.

According to Somaliland and DP World officials, Berbera’s new terminal will increase the port’s container capacity from the current 150,000 Twenty-Foot Equivalent Units (TEUs) to 500,000 TEUs annually.

Speaking to the media, Somaliland President Muse Bihi Abdi said the new facility is an economic opportunity for his region and areas nearby.

“With the new terminal, along with the second phase of expansion and economic zone along the Berbera corridor, we are now firmly positioned to further develop and grow our economy through increased trade, attracting foreign direct investment and creating jobs,” Abdi said.

He added: “This port will serve for the landlocked countries, mainly Ethiopia.”

In an exclusive interview with VOA Somali, the president of the Somali region of Ethiopia, Mustafa Mohammed Omar said the development of Berbera port is also an opportunity for the people of his region and those of Ethiopia.

“The livelihood of the Somalis in Ethiopia and that of the people in Somaliland are interdependent. Any development or economic success in Somaliland has a direct impact on our region because we are a strong and competitive market for the business in the region.”

Responding to a question on the security situation of his region, Mustafe said things are getting better, though not entirely settled.

“The situation is now calm. The clashes and conflict between our region and the Oromia region have been generally solved,” he said.  He added there were still “acts of aggression” west of City province in the Somali region that have left people displaced and called for the end of those hostilities.

Dubai-based DP World said it has committed to invest up to $442 million to develop and expand Berbera Port, with the first phase now completed.  The project was started in October 2018.

According to DP World, the second phase of the expansion includes extending the new quay from 400 meters to 1,000 meters and enabling the port to handle up to two million TEUs per year.

Somaliland broke away from Somalia in 1991 and acts as an independent state, although it has not secured international recognition.

Unlike the rest of Somalia, the region is generally peaceful and holds one-man-one-vote democratic elections.  Last month, it held elections for its parliamentary and local representatives.

Somali authorities in Mogadishu consider Somaliland to be part of Somalia, but always decline to comment on development projects in Somaliland.