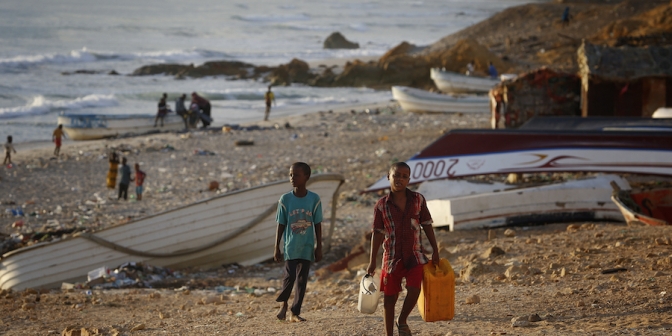 The story of the Somali seven — originally a Thai fishing fleet that has engaged in illegal fishing and human rights and labour abuses over several years — shows how foreign players in illegal fishing operations often have the help of Somali actors, both within and outside the government.

The waters off Somalia are some of the richest fishing grounds in the world. Following the steady decline in attacks by Somali pirates since 2012, foreign fishing fleets have gradually returned to Somali waters. Many of these, particularly those originating in Iran, Yemen and Southeast Asia, routinely engage in IUU (illegal, unreported and unregulated) fishing practices.

Over four decades of civil war, Somalia has Balkanised into a series of semi-autonomous regional administrations, loosely overseen by a federal government located in the capital of Mogadishu, and one breakaway region, Somaliland. State institutions are extremely weak and corruption is widespread. Relations between the central Federal Government of Somalia (FGS) and the regions have often been fraught, and the FGS and regional administrations have repeatedly entered into separate and often conflicting contractual agreements with foreign entities. Fishing licences and other permissions issued by one local Somali authority are often not recognised by another. These tensions have further heightened the political risk of doing business in Somalia for potential foreign partners.

Domestically, the prevalence of foreign IUU fishing vessels has been frequently cited as a justification for acts of piracy by Somalia-based gangs, who present themselves as defenders of Somali waters against foreign exploiters. However, the reality is far more complex. Foreign IUU fishing operations are frequently facilitated by local Somali agents, often in cooperation with government or quasi-governmental actors, who for a fee provide fishing licences, flag registrations, falsified export documentation and even armed onboard security detachments.

A prominent example of such facilitation emerged in 2017, when a fleet of seven long-haul trawlers — collectively dubbed the “Somali seven” by investigative journalist Ian Urbina — appeared in fishing waters off Puntland, a semi-autonomous region in north-eastern Somalia. The fleet consisted of the trawlers Chotpattana 51, Chotpattana 55, Chotchainavee 35, Chaichanachoke 8, Chainavee 54, Chainavee 55 and Supphermnavee 21. Onboard were 240 Cambodian and Thai crew members, who had been told that the vessels would not be operating beyond Thai waters. Urbina’s book The Outlaw Ocean extensively documented the labour abuses and human rights violations committed aboard the Somali seven, including beatings, lack of medical care, human trafficking, death threats and unpaid wages, which took place with the complicity of both Somali federal government and Puntland administration officials.