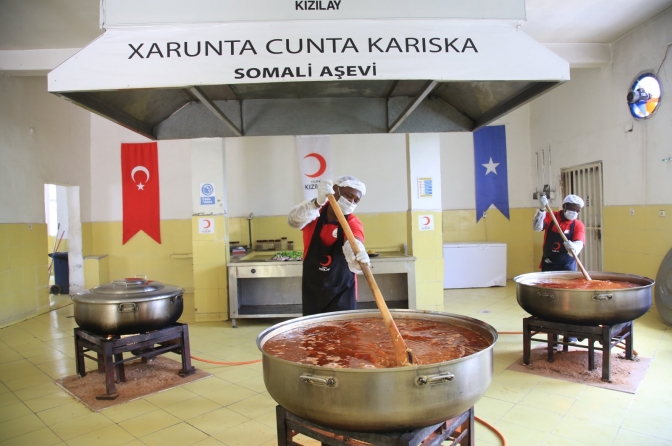 Donors’ contributions reach out to thousands in Somalia through daily meals, thanks to the efforts of the Turkish Red Crescent (KÄ±zÄ±lay). The Turkish charity, which started regular food aid operations after 2011’s great famine in the African country, provides meals through its soup kitchens in the country.

The aid caters to the poor, orphans and other disadvantaged communities. Every day, some 3,150 people benefit from meals in the capital Mogadishu and other parts of the country.

The charity is among the few operating in the country plagued by terrorist attacks, which deterred other foreign aid organizations. Hundreds of thousands of people were given a lifeline for more than a decade by the Turkish Red Crescent, which also provides food packages, hygiene kits and access to clean water to Somalians.

Orhan Kökcü, head of the Turkish Red Crescent delegation in Somalia, told Anadolu Agency (AA) on Thursday that their aid focused on displaced people and they opened their first soup kitchen in 2012. The kitchen prepares meals for orphanages, community centers for the disabled, hospitals and camps for the displaced. “It helps us to establish a bridge between the hearts of two nations,” Kökcü says. He said their work helped build Turkey’s image in Somalia where more people seek education opportunities in Turkey.

Kökcü said they also undertook water projects, to address severe clean water shortage in the country, including the construction of water wells. “The drought is a major issue for people, driving them to big cities when they cannot find access to water in rural areas. Some take shelter in camps and we also work in those camps, delivering food aid,” he said.

The charity also provides medicine to local hospitals and set up a mobile clinic, visiting remote villages. “We also set up vocational training courses in prisons, to help convicts’ rehabilitation,” he said.

From al-Shabab to the cabinet: Somaliaās move fuels debate

Is the World Ready to Investigate Somaliaās Run-in with the Eco-Mafia?