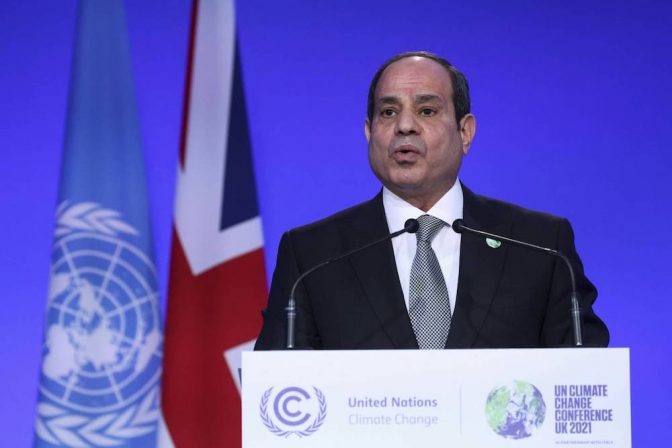 Diplomacy and patience are being used to resolve the dispute with Ethiopia over the dam. President Abdel Fattah El Sisi has told Egyptians that a large dam being built by Ethiopia on the Nile will not reduce Egypt’s share of the river's water.

“No one can come near Egypt’s water," Mr El Sisi said late on Monday.

"How? We talk, we employ diplomacy and patience," he said, without addressing recent comments by Ethiopian officials that Addis Ababa was open to resuming talks on the Grand Ethiopian Renaissance Dam.

The last round of talks between Ethiopia, Egypt and Sudan on the hydroelectric dam, in April last year, broke down amid a flurry of acrimonious comments by officials from the three Nile basin nations that have a combined population of about 250 million.

Meanwhile, Egypt has embarked on large water conservation projects that will make the maximum use of the Nile’s water, Mr El Sisi said.

The most populous Arab nation depends on the river for more than 90 per cent of its fresh water needs.
Ôøº
"I have done everything that could be done," he said. "I was patient, gave a chance and worked with what I have to maximise its use.”

Egypt has repeatedly said that a reduction in its share of the Nile waters, currently at about 55 billion cubic metres, could wipe out hundreds of thousands of jobs in its large agriculture sector and upset its delicate food balance at a time when its population is increasing by more than two million every year.

Sileshi Bekele, Ethiopia’s former negotiator on the dam and the country’s ambassador to the US, expressed earlier this month Addis Ababa’s interest in the resumption of the talks during a meeting with the new US special envoy to the Horn of Africa, Mike Hammer.

Ethiopia’s foreign ministry cited the ambassador as highlighting “Ethiopia’s interest to resume the African Union-led trilateral negotiation over the GERD”.

Is the World Ready to Investigate Somalia‚Äôs Run-in with the Eco-Mafia?