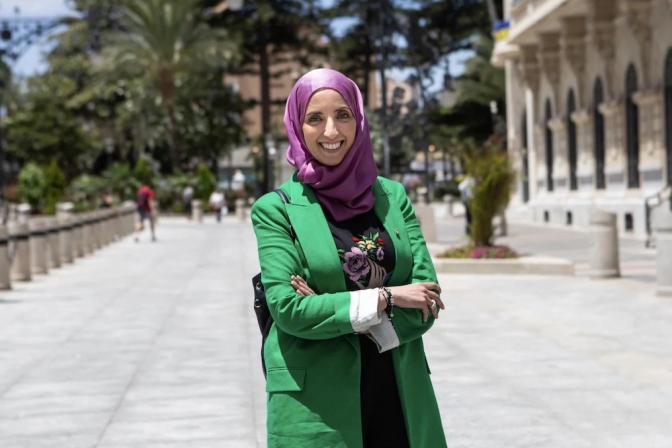 Fatima Hamed Hossain's outspokenness against a rising Spanish far right in Ceuta has turned her into a national symbol in the fight against hate speech and inequality.

On the main street of Ceuta, the autonomous Spanish enclave of 85,000 people in North Africa bordering Morocco, Fatima Hamed Hossain greets everyone who crosses her path with a smile and a hello in Spanish and Darija, the Moroccan-Arabic dialect.

Charismatic, self-made and from humble beginnings, Hossain's outspokenness against a rising far right has turned her into a national symbol for the fight against hate speech.

Having first entered the Ceuta political scene in 2007 as part of the Caballas Coalition, a left-wing regionalist organisation, Hossain later left to form her own party, the Movement for Dignity and Citizenship in Ceuta (MDyC).

Among the many occasions when Hossain has stood up to the far right, one of the most memorable came during a plenary session in the summer of 2020 in response to the far-right Vox party and its hardline stance against Islam in a city that is 43 percent Muslim.

'You can't measure how Spanish I am by my surname or how I dress. You cannot say that Muslims, Jews or Hindus do not belong to this society'
- Fatima Hamed Hossain, politician

"You can't measure how Spanish I am by my surname or how I dress," she said in her speech. "You cannot say that Muslims, Jews or Hindus do not belong to this society."

Hossain was born in 1978 in Los Rosales, one of the poorest suburbs of Ceuta, along with Hadu and El Principe, according to the Spanish Institute of Statistics (INE). As an only child of Moroccan parents, Hossain says that politics were never discussed at home; she just remembers seeing her father working all hours, loading trucks, in order to provide for the family.

"I never heard anyone talking about politics. I guess as an immigrant family, the only focus was on getting ahead," Hossain tells Middle East Eye while drinking Moorish tea in the main street of Ceuta.

"I got involved in politics because many of us have grown up in forgotten and abandoned areas," she adds, referring to the striking inequalities in Ceuta, where 40 percent of the population live at risk of poverty and social exclusion. "That makes you aware that there are citizens who, although they are equal in law, are not equal in rights."

Hossain's family was able to pay for her college through scholarships, and today she is a lawyer specialising in human rights and gender equality, a profession she balances with her duties as a political representative.