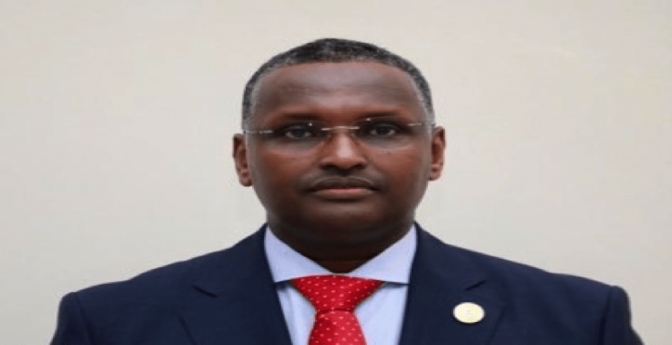 Fahad Yasin warned the staff of the agency against sharing the country’s secrets with Salad. The government still remains mum on the matter.

The Director of Somalia’s National Intelligence and Security Agency Mahad Salad is an “employee” of the terror group al Shabab and has plotted, coordinated and personally executed many terrorist activists in the country, including firing mortars into the capital and attempting to kill a former prime minister, said the agency’s immediate former chief in an explosive interview.

Fahad Yasin — who led the spy agency for two years and was the national security adviser to the immediate former president until last month — warned the staff of the agency against sharing the country’s secrets with Salad.

“Any officer who’s a member of the intelligence agency who shares a national secret with the (recently) appointed new director, is a person who is handing over the nation’s secret to the person from whom it was protected.”

Fahad, who never gave an interview during his time in office, said the newly elected President Hassan Mohamud “doesn’t know Mahad Salad” because “if he knew who he’s, he wouldn’t have appointed him [Salad].”

Salad didn’t publicly comment on the accusation, even though it has dominated the country’s political, security and internet chatter for more than a week now. Neither did the agency, known by the initials NISA, issue a statement on the stinging revelation by its former director.

The United States Embassy in Mogadishu didn’t immediately reply to an email sent to its public affairs’ office.

Rumors about Salad’s affiliation with al Shabab have been swirling around for years. A leader of a Sufi sector in central Somalia, Maalin Mohamud Sheikh Hassan, accused Salad of being a member of the militant group.

“Isn’t Mahad al Shabab,” Hassan asked a reporter interviewing him. “When did he quit al Shabab?”

The bombshell news is likely to reverberate beyond Somalia, as al Shabab poses danger to other countries, especially neighboring countries, two of whom were attacked by the terror group. The disclosure may also compel foreign intelligence agencies to balk at sharing sensitive information with their Somali counterpart, a potentially devastating blow to the war on terror in the wider Horn of Africa region.

“By appointing Mahad Salad to the agency, the president has committed a huge mistake. He should have vetted him thoroughly,” said Fahad in the interview with a Turkish-based Somali journalist, Farah Abdulkadir Mohamed, that has since been watched by millions of Somalis.

The allegation is already putting Mohamud’s new presidency in an embarrassing bind. The president seems to have rushed his fences when he appointed Salad just 10 days after his reelection on May 15. He appointed a new prime minister on Wednesday.

Fahad said Salad was on the intelligence agency’s radar and his activities were monitored.

“He has committed very big crimes in the country,” said Fahad, using the English word “crime”.

Fahad, a former Al Jazeera journalist, said the president should have looked into Mahad’s background, education and personality even if he’s his friend. He should have consulted with many people as the tradition is around the world before appointing an individual to head a spy agency, Fahad said.

Fahad said he “personally” handled Salad’s file and was willing to share the evidence showing the new director’s link to the terror group with relevant authorities.

The former spy chief didn’t delve into how, where and exactly when al Shabab recruited Salad, but said that the group recruits people through “money” or “coercion”.

“It’s unfortunate, stomach-turning and troublesome to appoint a man who is a threat to the security of the country to the national intelligence agency, to make him its head. I think it can be described as the scandal of the century,” Fahad said.

Fahad reeled off Mahad’s terror activities in the country, including an attack in which militants stormed the presidential palace in 2014 and killed Mohamud Hersi Abdullahi “Indha’ase”, the chief of staff of the then prime minister, and Gen. Nur Shirbow, the deputy director of the spy agency at the time.

“Mahad was a part” of that plot, Fahad said, also accusing him of facilitating the entry of al Shabab’s explosives-laden vehicles into the capital.
“Al Shabab is not a blind man, walking. They’re not blind people hitting a random target. There are people who aid them and do the facilitation. He’s a part of the people who do the facilitation for the Shabab,” said Fahad.

When asked why the agency didn’t arrest Salad, Fahad said the intelligence agency was waiting until Salad left his parliamentary seat that had given him immunity.

“Now he’s an ordinary person. He can be held accountable,” Fahad said. “The director of the intelligence agency has no immunity.”
If the agency went public with its report before, Fahad said, the public would have “simply dismissed (it) as the targeting of an opposition man and would have said it’s a false.” He said Salad hid behind the parliamentary immunity, even though “he did very huge things to the country.”

The accusation that the country’s head of the intelligence is a member of the militant group is so earth-shattering that the whole government has so far remained tight-lipped.

Many is the time Somalis accused some of their politicians of being foreign agents or working on behalf of al Shabab, but Fahad’s charge is the first time ever in the country’s history that a head of the intelligence agency was publicly fingered for having ties to a terror group that is associated with al Qaida.

Allegations that link some politicians and intelligence officers to other countries are not uncommon in the world — even in the United States and the United Kingdom.

In 2017, the F.B.I. opened a counterintelligence inquiry to determine if the US’s former President Donald Trump was an agent of Russia. Trump derided it as “Part of the Witch Hunt.” A former UK intelligence agent, Peter Wright, accused a former Director of MI5 Roger Henry Hollis and former British Prime Minister Harold Wilson of being agents of the former Soviet Union.

In the five-part interview that enthralled the Somali public for more than a week, Fahad disclosed the extensive terror operations Salad carried out or aided.

“He tried to kill one of the country’s former prime ministers,” Fahad said, adding that he called the premier and asked him whether he was to meet with Salad and another person accompanying him and when he answered in the affirmative, he said, he told him, “don’t meet them.”

“The gap was 15 minutes. He survived by dint of my intervention in that 25 minutes,” Fahad said, declining to disclose the name of the premier.

In another plot, Salad coordinated, according to Fahad, with an al Shabab leader, Mahad Karatay, to bring two explosives-laden cars into a building where a session of the two houses of parliament was to take place. He said he had alerted the speakers of both houses to the potential attack and asked them to postpone the session “for security reasons.”

Salad was the one “who plotted it,” he said of the foiled attack, without offering further details.

But there were other plots that succeeded.

One of the most damning accusations Fahad leveled against the new intelligence chief was the claim that Salad bought mortars on behalf of al Shabab, then coordinated with the militants before he personally fired them into the capital, Mogadishu.

“What’s more shocking is, he knew that we were aware of him, but he was hiding behind the parliamentary immunity he had,” Fahad said, revealing that former Prime Minister Roble was “aware” of Salad’s link to the militants.

Fahad said he had told Roble in his first visit to the headquarters of the intelligence agency that Salad and others — “some of them within the system, especially at important positions” — had ties to al Shabab.

“I challenge the prime minister to deny that Fahad told him that,” he said, adding that the premier “put his hand over his head” in shock when he heard the news.

“It’s a disaster to appoint someone like” Salad to an intelligence agency, Fahad said, enumerating three conditions that disqualify any person from becoming the head of a spy agency: Corruption, being a foreign agent and having a link to what the agency is combating.
“It would have behooved President Hassan Sheikh to assign other men who are his friends who don’t have any ties to these three descriptions,” Fahad said. “He’s friends with many, good men who can do the job.”

Fahad said he had decided to make the information public after the president didn’t heed his advice.

Fahad said Salad was also involved in an attack on people who were to meet with Prime Minister Roble in the open air in the central Somali town of Galkayo. A military commander and two senior military officers were killed in that attack on Dec. 18, 2020.

“He’s the one who plotted it, he’s the one behind it and it’s a fact. And I can tell the details of the witness, the evidence and who was in the loop and everyone else,” said Fahad, revealing that the aim of the militants was to “disrupt all that meeting and render many Somali people dead”.

Fahad — who was on Aug. 16, 2018 appointed to the agency as a deputy director before being promoted to become its director on August 22, 2019 — said the spy agency registered significant improvements during his tenure.

“The agency reached a point it was better — I can use that word — than our neighbors’ intelligence” agencies, Fahad said in the interview.

He said three Somali officials and two foreign countries tried to soil the agency’s name when they orchestrated the killing of a former intelligence agent, Ikran Tahlil, almost a year ago.

Fahad, who was President Farmajo’s national security adviser between Sept. 7, 2021 and May 15, 2022, said former Prime Minister Roble, Deputy information Minister Abdirahman Sheik Yusuf Al adaala and Salad had worked on the abduction and possible scheme of killing Ikran “to harm the agency and tarnish its name”.

“The first responsibility falls on Prime Minister Mohamed Hussein Roble,” Fahad said, adding that Salad took Ikran in his car to the posh estate of Darasalam in the capital, then to the lower Shabelle region before finally dropping her off in an area near Jilib town, where she was possibly murdered.

“A man called Mahad Karatay, who’s one of al Shabab’s leaders, executed the operation. He has close relations with Mahad Salad,” Fahad said. “The prime minister was aware [of the operation] and knew that she [Ikran] would be harmed.”