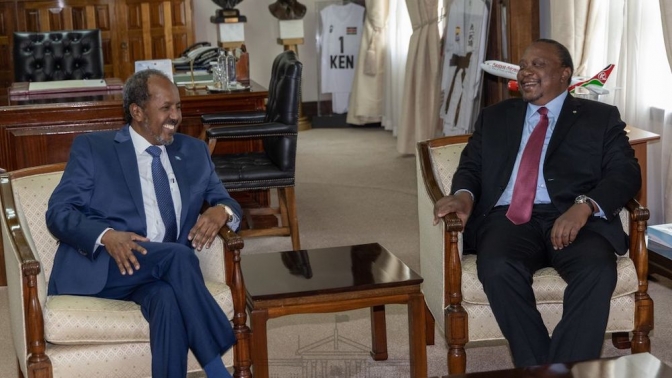 Somalia has allowed the resumption of miraa exports from Kenya and permitted Kenya Airways to start scheduled flights to Mogadishu in the latest sign of improving ties between the two neighbouring countries.

The decision was made during the second meeting between President Uhuru Kenyatta and his Somali counterpart Hassan Sheikh Mohamud, this time in Nairobi. The two had met last month during the inauguration of Mr Mohamud in Mogadishu after he won the presidential polls in May.

And on his first visit to Kenya since he took the mantle, he told a press conference he was ready to “repair” relations with Kenya based on mutual respect and to be able to tackle common challenges. They agreed to reopen their land border, which was closed more than ten years ago but remains porous with terrorists moving between their territories.

“There is a lot to bring us together than to divide us,” President Mohamud said in a joint press briefing with Mr Kenyatta. “The common challenges we have are not limited to terrorism or droughts. We have a lot more challenges.”

A joint communique between Kenya and Somali delegations had earlier indicated miraa exports from Kenya and fish imports from Somalia will resume “with immediate effect.”

They “agreed to facilitate, diversify and promote trade and economic cooperation between the two countries….and directed the immediate market access of fish and fish products from Somalia to Kenya and vice versa and the resumption of trade in khat (miraa) from Kenya to Somalia, to resume with immediate effect.”