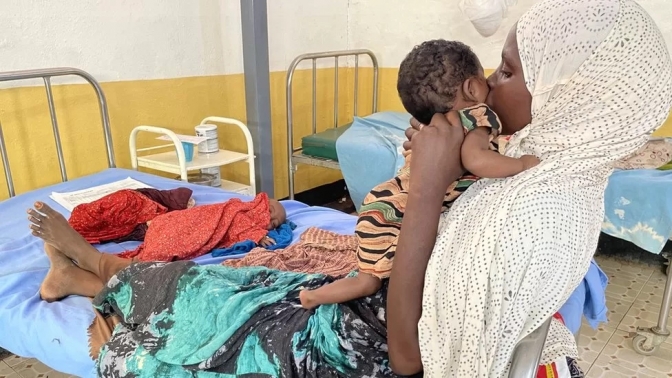 After two days in a small Somali hospital, Abdiwali Abdi seemed to be groping his way towards some sort of recovery.

The two-year-old still weighed just 4.6kg (10lb 2oz) - not much more than a healthy newborn. But he had the energy to moan now, and his mother, Hawa, sat beside him on the bed, in the border town of Dollow, breastfeeding her two-month-old daughter and making hopeful plans to return to their makeshift camp on the dusty outskirts.

"It's encouraging," said Fatuma Mohammed, a senior nurse and administrator from Kenya, as she paced around the 17-bed stabilisation ward, with its 17 infants all wrestling with malnutrition, and with the various diseases that keep it company here on the dry, thorny plains of southern Somalia, as the country grapples with its worst drought in 40 years.

"We don't have food to feed him, but our neighbours have been helping us," said Hawa, 22, watching her son closely. He'd been growing weaker for weeks, with a fever and diarrhoea, before they finally came to seek help.

The district hospital in Dollow - a dusty little border town in south-western Somalia - has been quietly assisting children like Abdiwali for years. Funded by the UK government, and others, it has built up a network of community workers who provide basic medical support, not just in town, but deep into the contested countryside, where the militant Islamist group al-Shabab controls many villages.

But today, following a fifth failed rainy season, Dollow is being overwhelmed by a surge of new arrivals. Tens of thousands of families like Abdiwali's - their cattle dead and their farms parched - have gathered in crowded informal settlements, hoping to find food and safety.

"We're talking about hundreds of thousands of lives [at stake] and people are dying now. We don't have enough resources to support them," said Abdulkadir Mohamed, from the Norwegian Refugee Council, watching more families arrive at one of the larger camps.