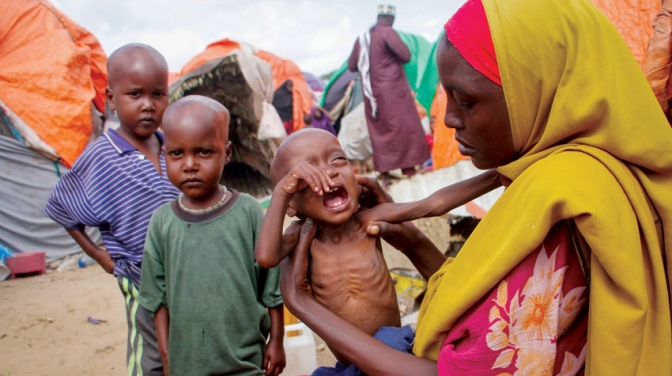 More than a quarter of a million people died of starvation in Somalia in 2011, half of them children under the age of five, and the situation in the coming months could be much worse, according to a report by Joshua Hallwright, deputy director of the Center for Humanitarian Leadership at Australia’s Deakin University, despite commitments The world must not allow the 2011 famine to happen again.

The United Nations predicts that more than 300,000 people in Somalia will be starving by December, due to one of the consequences of climate change, severe drought.

Somalia is home to 16 million people and has a rich history dating back to before the Roman Empire; Where the Somali people were producing beautiful rock art in the third millennium BC, and they traded with ancient Egypt, and established important mosques in Mogadishu between the seventh and thirteenth centuries, but in recent times, the Somali people have suffered from wars, locust plagues, floods, epidemics, and now severe drought.

Hallwright says in a report published last Tuesday on The Conversation: “The ongoing crisis means that 7 million people need humanitarian assistance, which is two million more people than it was just three months ago…Despite historical levels of drought and hunger, he continues. Somali civil society looking for ways to support people at risk of starvation; But additional help is needed, and so far, the international community has largely failed the Somali people, and the threat of starvation exists.”

There is a well-established and globally recognized system for classifying how close people are to famine. Mortality (for every 10,000 people, more than 2 people die every day), severe levels of starvation (more than 1 in 5 families without food).