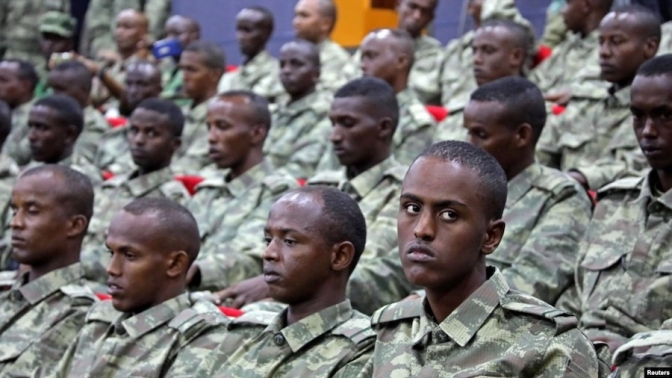 In central Somalia, federal troops supported by local fighters have been slowly seizing territories from al-Shabab since August. The current military offensive is entirely planned and executed by Somali commanders and local forces, a significant and confidence-boosting achievement.

“We inflicted heavy defeat on terrorists, and we have dislodged them from large territory in the regions, Hiran in particular, which has been the focal point for the operation,” Army Chief Brigadier Gen. Odawa Yusuf Rage told VOA Somali.

“The ultimate goal is to remove these terrorists from Somalia and eliminate them.”

Gen. Rage and Defense Minister Abdulkadir Mohamed Nur were in Jubbaland this week to oversee regional forces that are planning to join the operations. The strategy is intended to open a new front against al-Shabab in the south.

Troops trained by Turkey and the United States are the core of Somali forces undertaking these operations.

On September 30, 2017, Turkey established the largest overseas military training facility in Somalia. Turkey has so far trained 5,000 commandos known as Gorgor (the eagle). To strength the command and leadership, Turkey also trained 316 officers and 392 non-commissioned officers.

The training courses are continuing, and army recruitment centers in Mogadishu are attracting young university graduates.

Gen. Rage, who himself was trained in Turkey, praised Ankara’s role. “It’s contributing significantly to the training and building of the Somali national army,” he said.

Rage said troops trained by Turkey have made a “significant difference” in the fight against al-Shabab.

The Turkish Defense Ministry said its engagement with Somali forces is to contribute to peace and stability in Somalia. It said the aim is to improve the organization, training, military infrastructure and logistics systems of the Somali National Army.

“The battalions trained and equipped by Turkey have been successful in recapturing large numbers of al-Shabaab-controlled settlements, defending their bases and neutralizing terrorists,” said a Turkish statement sent to VOA. “These battalions will form the backbone of the Somali National Army in the future. We believe that the personnel trained by the Turkish Armed Forces will serve not only the security of Somalia, but also the security of Africa and beyond.”

The elite Somali forces known as Danab (lightning) are trained by the U.S., and they are the other major forces involved in ongoing operations. Danab force strength is inching closer to 2,000 including a new batch of 350 troops that started training just few weeks ago at an airfield west of Mogadishu.