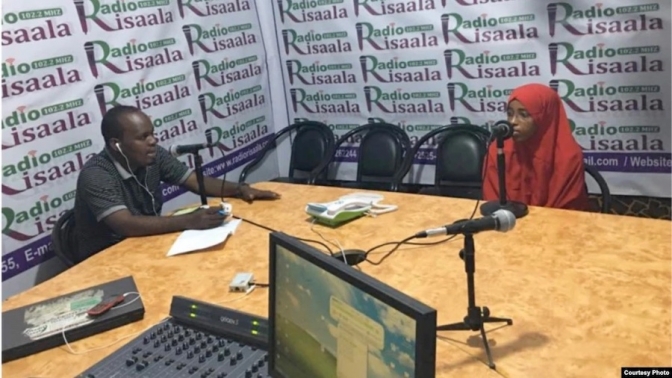 MOGADISHU, SOMALIA — In its latest directive to media, the Somali government has requested that local news outlets submit content for approval before it airs.

Several media houses in Mogadishu told VOA this week that the President’s Communications Office had ordered them to submit news content to authorities before it airs.

Among those affected was Risaala Media Corporation in the capital, Mogadishu. Its managing director, Mohamed Abdiwahab, said, "The objective was censorship, because directing [the media] to send the items is just singling out the items that they don't like. Therefore, its implementation is risky to Somali media and cannot be implemented.”

Deputy Information Minister Abdirahman Yusuf Adala told VOA via a messaging app that he was not aware of such a directive.
But Abdiwahab said an official called his company with the directive last Saturday. He said he thought the order infringed on the country’s constitution and media law, both of which provide guarantees for media freedom.

The directive was the latest government order directed at media. In recent months, journalists were warned off from publishing al-Shabab content and to refer to the militant group only as Khawarij, which loosely translates as “those who deviate from the Islamic faith.”

The Somali government is engaged in a military campaign against al-Shabab. But journalists say the directives on covering the group will limit press freedom and could put them at risk of retaliation.

The Somali Journalists Syndicate, an umbrella organization for media that protested the directives, has come under pressure from authorities. Its secretary-general, Abdalle Ahmed Mumin, is currently out on bail after two arrests in October and November.

Journalists and guests are pictured at Radio Risaala in Somalia's capital, Mogadishu. (Risaala Media Corporation)
Journalists say submitting content will interfere with editorial independence and the public’s right to know. Abdirahman Adani, editor of Garowe Online, said the new directive "paves the way for the government to silence the independent media, which is now the only trusted source of news for the public.”

Adani said the directive would force media to surrender their watchdog role.

Somalia is already a difficult environment for reporters, media watchdogs say. As well as attacks and threats, journalists risk arrest.

In the latest case, British-based freelancer Jamal Osman, who has won awards for his coverage of al-Shabab, was arrested in Mogadishu last Saturday and was deported to the United Kingdom. The reason for his deportation was not made public.

Corruption in Somaliaâ€™s government: How Damul Jadiid group is looting the nation