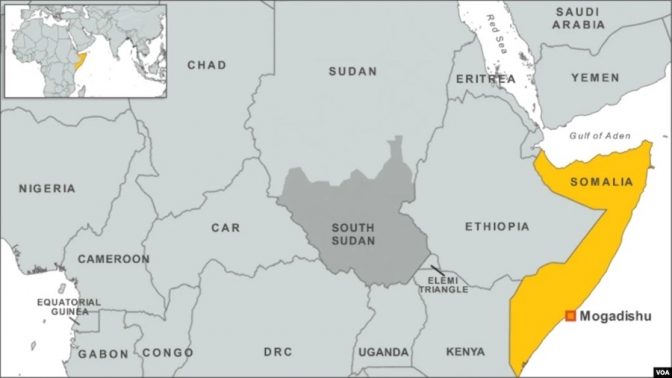 MOGADISHU, SOMALIA — Somali officials say a pre-dawn attack by militants on an army base was repelled but left at least seven soldiers dead. The attack took place in a part of southern Somalia recaptured from the militant group al-Shabab last week.

The attack took place early Friday in the village of Hilowle Gaab, on the outskirts of the recently liberated town of Runirgod in the Middle Shabelle region.

The army said Runirgod, 240 kilometers north of Mogadishu, was the last al-Shabab stronghold in the region.

Daaud Haji Irro, the spokesman for Hirshabelle state, told VOA via WhatsApp that the attack began with five explosions and was followed by a heavy gunbattle.

He said seven soldiers were killed, including a military colonel and two other officers, and that a number of attackers were also killed.

He said the "khawarijs" have this morning attacked forces in Hilowle Gaab, and troops inflicted heavy casualties on the group, leaving their bodies are scattered on the battlefield. He said the militants fled into a forest in the Galgadud region.

Khawarijs is a derogatory term used by Somali government officials to describe al-Shabab.

Locals who spoke with VOA over the phone after the deadly attack said several civilians were also killed in the fighting.

Al-Shabab claimed responsibility for the attack and said it killed 31 soldiers, including five senior commanders. It also said it had seized 8 military vehicles.

ŌĆ©VOA could not independently verify the group’s claims.

The attack comes a day after a twin suicide car bombing in the country’s central town of Mahas killed more than 30 people and wounded more than 40 others.

Al-Shabab also claimed responsibility for that attack, the deadliest in the Horn of Africa nation since the start of the year.

Last year, Somalia’s president, Hassan Sheikh Mahamud, declared an “all-out war” against the militant group. Since then, Somali government forces backed by clan militias have succeeded in recapturing towns and villages in central Somalia that the group had controlled for years.

Corruption in SomaliaŌĆÖs government: How Damul Jadiid group is looting the nation