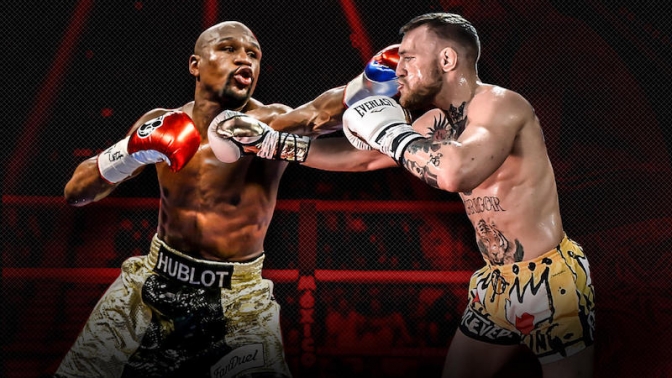 THAT’S it, folks. The freak show is over.

McGregor stunned everyone from the outset, taking the first two rounds by bullying Floyd with his superior reach.

Referee Robert Byrd told the Irishman to hold back from his brutal shots to the back of Mayweather’s head early in the second round as the two fighters locked together. McGregor’s unorthodox style was obvious, landing a number of blows at awkward angles and putting severe doubt in the minds of commentators as to who had the upper hand.

McGregor’s inexperience in the ring was obvious as he began to tire midway through the fight, but the UFC double champ was still able to give boxing’s undefeated superstar a headache.

But it all turned south for the 29-year-old as the fight began its second half.

Mayweather troubled McGregor late in the seventh round, landing a series of punches to his head as the debutant attempted to switch up his position in the ring.

The 40-year-old proved his immortality in the ring as McGregor struggled to keep his hands up in defence, allowing Floyd an easy opening to land the final, fatal barrage of punches to end the fight via TKO.

Here’s how the world reacted to the biggest boxing fight in history.

‘HOT GARBAGE’: DID JUDGES GET IT WRONG?

McGregor fought well above the level many expected of him, out-punching Mayweather 51-40 in the opening five rounds. However, despite seemingly being on top early, two of the three judges only gave “The Notorious” one round.

McGregor himself felt he had the better of the early exchanges, obviously not seeing eye to eye with the two judges who were pro-Mayweather.

“I feel it was 5-4 heading into the 10th. I would have liked to get to the bell,” McGregor said in the post-fight press conference. “I think that’s very, very biased. I’m actually shocked at that. I won the first three rounds clearly … I snuck the eighth.”

Mayweather’s dominance shone through as the fight wore on. He landed 170 of 320 punches while McGregor collected with 111 of 430 attempts.
Combat sports experts around the world reacted in anger to the judges’ “bizarre” verdict, claiming McGregor was robbed.

McGregor’s debut in the ring may have ended in heartbreak, but at least the Irishman has something to brag about.

McGregor’s effort against Mayweather saw him land more successful punches than Manny Pacquiao in his superfight against the undefeated star in 2015.

McGregor sits behind only Canelo Alvarez for the most blows landed on the 40-year-old in his 50-fight history.

Mayweather was right, he has been here and done that plenty of times before. The 50-0 champion confirmed his hyped fight against McGregor would be his last in a composed interview after the fight.

“Tonight was my last fight, for sure,” he told thousands of screaming fans at T-Mobile Arena before praising his opponent.

“He was a lot better than I thought he was. He used a lot of different angles but I was the better man on the night.”

The 40-year-old said he knew the exact moment the megafight was over.
“At about 25 minutes he started to slow down,” he said. “If I’m not mistaken, I guaranteed everyone this fight wouldn’t go the distance.”

Several times throughout the fight the referee had to step in as McGregor threw illegal punches that hit Mayweather on the back of the head.

Mayweather refused to criticise his opponent or the official but did acknowledge the UFC icon pushed the boundaries of what’s acceptable in the boxing ring.

“I’m not here to bash anyone,” Mayweather said at the post-fight press conference. “I can’t be the fighter and a ref — I have to choose what I’m going to be.

“There was a lot of rabbit punching, a lot of punching in the back of the head.

The pair pushed each other after the bell sounded at the end of the fifth round, and the US star revealed how he taunted his opponent.

“I said, ‘You still haven’t knocked me out yet. You said it wasn’t going past four (rounds), show me your power,’” Mayweather said.

To be fair to Conor McGregor, the odds were never in his favour. Despite being the younger, taller, heavier man with an unshakeable level of confidence, the Irish UFC champion could not have dreamed to out-punch the greatest boxer of all time.

The 29-year-old started strong with a number of solid jabs to Mayweather’s head but lost his stamina as Floyd’s experience took over.

McGregor’s legs turned to jelly in the 10th round, sending a clear signal to referee Robert Byrd to stop the fight and grant Mayweather the victory.

“I thought I won the early rounds pretty handy,” McGregor said. “He’s composed. He’s not that fast, he’s not that powerful, but boy was he composed.”

McGregor hit out against Byrd for ending the fight so soon, claiming he wanted a cleaner finish by being theatrically knocked down.

“They should have let me keep going, but fair play,” he said. “I was just a little fatigued. I was a little wobbly, he (ref) should have let me go down.”
Despite his disappointment, McGregor was upbeat during his post-fight media commitments, saying he enjoyed the experience.

“I enjoyed the fight, it was a great contest,” he said. “It was an honour to share the ring with him.

“This was some buzz to come in and face this man.”

McGregor’s long-time coach John Kavanagh was optimistic in defeat, claiming his MMA champ would be back for seconds.