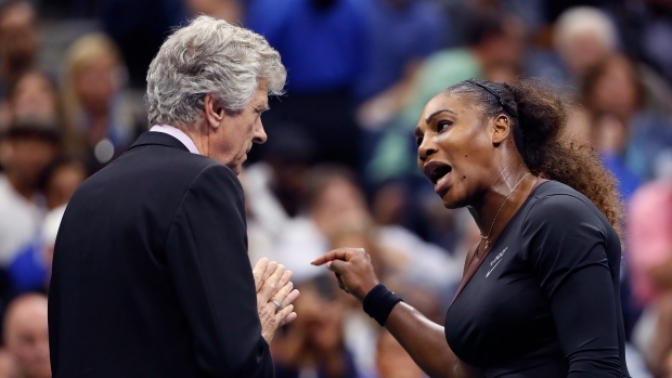 LONDON -- The International Tennis Federation is defending the chair umpire who gave Serena Williams three code violations during the U.S. Open final, saying his "decisions were in accordance with the relevant rules."

Williams was cited by Carlos Ramos three times Saturday during her 6-2, 6-4 loss to Naomi Osaka: for getting coaching signals; for breaking her racket, which cost her a point; and for calling Ramos a thief, which cost her a game.
On Sunday, the tournament referee docked Williams $10,000 for "verbal abuse" of the chair umpire, $4,000 for being warned for coaching and $3,000 for breaking her racket.RELATED STORIES
* Tennis pros debate who was worse: Serena Williams or umpire Carlos Ramos
* Serena Williams loses U.S. Open following arguments with umpire
The ITF said in a statement Monday that Ramos' citations were "reaffirmed by the U.S. Open's decision to fine Serena Williams for the three offences."
The governing body of tennis added that: "Ramos undertook his duties as an official according to the relevant rule book and acted at all times with professionalism and integrity."