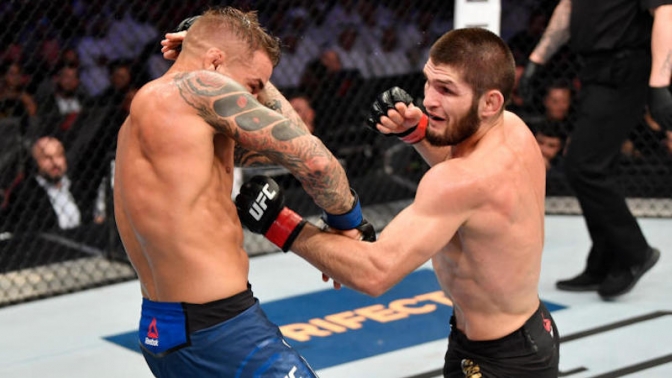 With a performance worthy of strong consideration as the pound-for-pound best in MMA today, UFC lightweight champion Khabib Nurmagomedov took one step closer to one day rubbing elbows with the greatest the sport has ever seen.

Save for a pair of hard left hands from Poirier to open Round 2, which briefly caused the champion to take a step back, this was as thorough and impressive a performance as Nurmagomedov has recorded to date in the second defense of his 155-pound title.

Nurmagomedov, a native of Dagestan, Russia, entered the cage as the crowd favorite in his first bout since submitting Conor McGregor at UFC 229 last October. The pay-per-view blockbuster, which set a new UFC record for buys, ended with an ugly melee that saw Nurmagomedov serve a nine-month suspension in the aftermath.

There was no such theatrics or disdain between fighters on Saturday. In fact, Nurmagomedov went above and beyond to show respect for Poirier by hugging him after the fight, wearing his t-shirt during his post-fight interview and imploring the crowd to donate to Poirier's charity.

"Why do we have so much more respect between us than the last fight? You know this bullshit guy [McGregor] that I had a lot of crazy stuff but I want to forget everything," Nurmagomedov said. "We show what this is in MMA that No. 1 is respect. That is what your coach teaches you first that you have to respect the gym, your teammates and to clean the gym. MMA is not about trash talking and this is what we show."

Nurmagomedov extended his UFC win streak to 12 fights, which is tied for the third longest in promotional history. With his father and original trainer Abdulmanap in his corner for the first time in the UFC (after years of visa issues kept him from being able to travel to the United States), Nurmagomedov showcased every aspect of a dominant grappling game that is unrivaled in UFC history.

Despite an incredible four-fight win streak coming in and a striking game that some felt could be the perfect remedy for Nurmagomedov's takedowns, Poirier (25-6, 1 NC) simply couldn't keep the champion off of him. The Louisiana native spent the majority of the fight on the ground and expending all his injury to avoid being submitted as Nurmagomedov suffocated him and never let go.

Once Nurmagomedov recorded takedowns in each of the three rounds, Poirier spent the remainder of the time working to get him off. Yet each time Poirier would work to his feet, Nurmagomedov instantly dragged him back down.

Not only did Nurmagomedov, 30, do a good job blocking kicks early in each round, he set up his shots perfectly with combination punching upstairs. Following a pair of deep choke attempts, Nurmagomedov closed the opening round in top position reigning down hard strikes. The champion then opened Round 3 by badly cutting Poirier's eye with short punches while they kneeled along the cage.

Nurmagomedov never panicked as Poirier briefly applied a guillotine attempt and went to take his opponent's back. The champion's second attempt at a rear-naked choke saw him sink it in deep as the 30-year-old Poirier quickly tapped at 2:06 of Round 3 just as Nurmagomedov sat back to crank up the torque."I knew he was going to press and that I was going to be up against the fence a lot.

"I just feel like I let myself down," an emotional Poirier said. "I didn't cut any corners getting prepared for this. I feel like my whole career set me up for this moment. Maybe there were times in there I could have done more. I was just so prepared and now I have to wake up and look at myself in the mirror every morning with this result.

"If anything adversity has taught me in the past is that if times are good be grateful and if times are bad be graceful. So I'm just going to go home and spend some time with my family. It has been a long road. I'm proud of everything I accomplished in the sport. I have a lot of tread left in the tires but for now I just need some time to think. I'm sorry for anyone I let down with this performance. I promise you I wanted this more than anything."

Although Nurmagomedov spent much of fight week saying he would grant the next title shot to former interim champion Tony Ferguson -- a fight UFC has attempted to book four times to no avail -- he was reluctant to confirm his plans afterwards.

"Last two years was very busy for me. I want a little bit to relax," Nurmagomedov said. "I have too much pressure on my shoulders. Give me a little bit of time, maybe a couple of days."

In the co-main event, Paul Felder showed off his other-worldly durability in scoring a decision win over Edson Barboza. The pair of lightweights left the Octagon battered and bruised with numerous cuts crossing their faces, but Felder did just enough to earn the win, and call out everyone above him in the rankings in the process.

CBS Sports was with you for every punch, kick and submission attempt with our live blog below. If you are having trouble viewing the blog, please click here.